Art In The Field 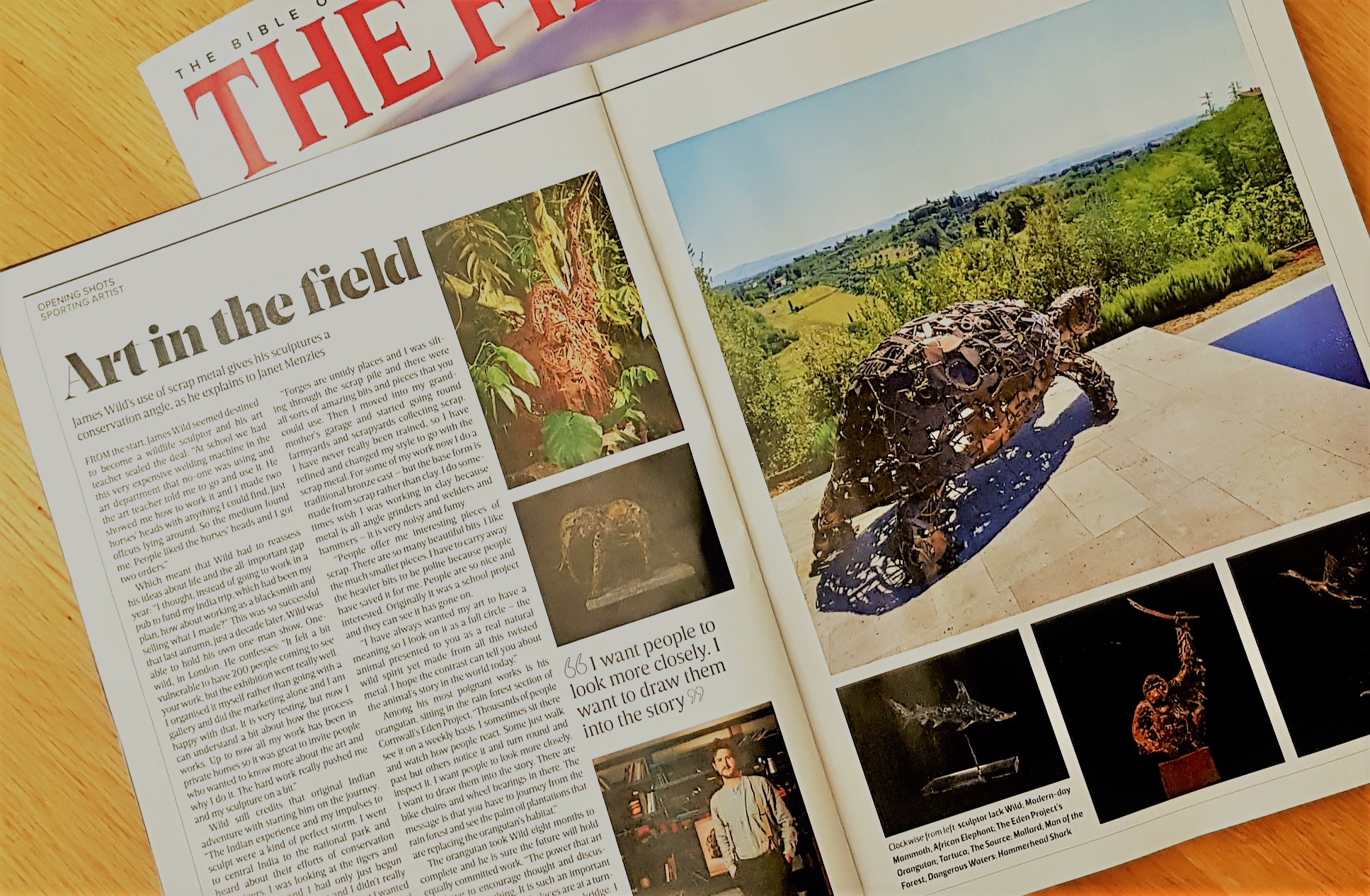 https://www.thefield.co.uk/country-house/art-antiques/james-wild-sporting-artist-43843
Having happened upon sculpture as a medium and scrap metal as a material by chance, James Wild uses both to tell the stories of animals in the world today, as he tells Janet Menzies.

From the start, James Wild seemed destined to become a wildlife sculptor and his art teacher sealed the deal: “At school we had this very expensive welding machine in the art department that no-one was using and the art teacher told me to go and use it. He showed me how to work it and I made two horses’ heads with anything I could find, just offcuts lying around. So the medium found me.

People liked the horses’ heads and I got two orders.” Which meant that Wild had to reassess his ideas about life and the all-important gap year: “I thought, instead of going to work in a pub to fund my India trip, which had been my plan, how about working as a blacksmith and selling what I made?” This was so successful that last autumn, just a decade later, Wild was able to hold his own one-man show, Onewild, in London.

He confesses: “It felt a bit vulnerable to have 200 people coming to see your work, but the exhibition went really well. I organised it myself rather than going with a gallery and did the marketing alone and I am happy with that. It is very testing, but now I can understand a bit about how the process works.  Up to now all my work has been in private homes so it was great to invite people who wanted to know more about the art and why I do it. The hard work really pushed me and my sculpture on a bit.”

Wild still credits that original Indian adventure with starting him on the journey. “The Indian experience and my impulses to sculpt were a kind of perfect storm. I went to central India to the national park and heard about their efforts of conservation with tigers. I was looking at the tigers and photographing and I had only just begun my sculpting at that time and I didn’t really know where I was going with it, but I wanted meaning to be behind my work. I wanted there to be a reason for it to be there. It married together the two impulses.”

Wild’s conservation message is given extra credibility by his use of scrap metal and found items. Again, this happened by chance. “The idea of working with scrap metal started because it was stuff that was lying around. In the mornings I was working for a local blacksmith who taught me how to use the forge and metal. Then, in the afternoons, I was able to use the forge for my own sculptures. “Forges are untidy places and I was sifting through the scrap pile and there were all sorts of amazing bits and pieces that you could use.

Then I moved into my grandmother’s garage and started going round farmyards and scrapyards collecting scrap. I have never really been trained, so I have refined and changed my style to go with the scrap metal. For some of my work now I do a traditional bronze cast – but the base form is made from scrap rather than clay. I do sometimes wish I was working in clay because metal is all angle grinders and welders and hammers – it is very noisy and fumy.

“People offer me interesting pieces of scrap. There are so many beautiful bits. I like the much smaller pieces. I have to carry away the heavier bits to be polite because people have saved it for me. People are so nice and interested. Originally it was a school project and they can see it has gone on. “

I have always wanted my art to have a meaning so I look on it as a full circle – the animal presented to you as a real natural wild spirit yet made from all this twisted metal. I hope the contrast can tell you about the animal’s story in the world today.” Among his most poignant works is his orangutan, sitting in the rain forest section of Cornwall’s Eden Project. “Thousands of people see it on a weekly basis. I sometimes sit there and watch how people react. Some just walk past but others notice it and turn round and inspect it. I want people to look more closely. I want to draw them into the story. There are bike chains and wheel bearings in there.

The message is that you have to journey from the rain forest and see the palm oil plantations that are replacing the orangutan’s habitat.” The orangutan took Wild eight months to complete and he is sure the future will hold equally committed work. “The power that art can have to encourage thought and discussion is the next thing. It is such an important issue now that these wild places are at a turning point and I want to make that bridge. I want to bring innovation and exciting projects. I want to see what can be achieved and learn from that, and create more impact.”

For more visit the Eden Project at: edenproject.com

Link to The Field article

Sign up to my newsletter to receive updates from the workshop